Today seems like an appropriate time to share my Uncle Bob’s experience.  There are many leadership lessons to be learned from ‘the greatest generation’ and today is a good day to ponder how to apply those lessons in our lives today. 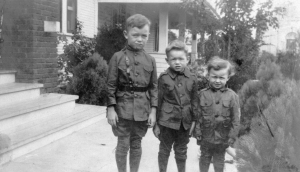 Robert Cates was the oldest son of a small town pharmacist in Oklahoma.  He studied pharmacy at the University of Oklahoma intending to follow in his father’s footsteps.  At OU he also enrolled in the Army ROTC program.  After graduating in 1937, he continued as an officer in the Oklahoma National Guard.  In 1940 his unit was

called up.  I’ll let the local newspaper pick up the story from there:

“. . . During all the training periods, Cates had been promoted to Captain and was given command of Tulsa’s Company L, 180th.  On June 8, 1943 their convoy dropped anchor in the harbor of Oran, Algeria.  After a short training period of landing operations, they boarded ship to be re-embarked and were told they were going to make a landing in Sicily.  Cates’ company was to . . . land about one-half mile east of the Acrate River just east of the town Gela.  Before the landing on July 10, 1943, the Mediterranean winds began to kick up and the sea became full of rolling swells; the landing crafts were on 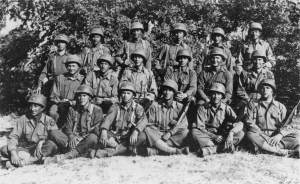 the point of becoming capsized.  After the men finally got into the small boats, due to a naval error they were landed in wrong places.  Cates’ company L was landed as far as six miles south of Red Beach . . .  this was due to failure of the navy boat crews not knowing the right beaches and the landing zones not being properly marked.  It wasn’t until 8 p.m. they were able to become a fighting unit.  Company L and the 3rd Battalion conducted a successful

flanking attack and played a big part in the capture of Biscari Airport.  Up to this point, this had been the toughest and most vicious fighting that the 180th had been engaged and they were successful in defeating the German counter-attack launched to retake the airport.  By the 27th of July, Cate’s company L was overlooking the town of Castel di Tusa having arrived under the cover of darkness.  He immediately disbursed scouts and patrols and his men located two companies of Germans.  His men, even though small in number, made the enemy think they were a much larger force, causing the Germans to withdraw and while giving up their very valuable high ground to Cates without having to fire a shot.

The 45th Division started their landing on Anzio beach-head on January 30, 1944.  Captain Cates had now been assigned to the 180th Regimental command Post . . . (Cates) was considered by his superior officers to be an excellent planner and leaders of men.  In talking with Lt. Col. Bill Whitman, retired former B Company Exec  . . . stated “Old Bob was brilliant and give his job all that he had to give.  There are a lot of soldiers returned home safe and sound from the war because of the diligence he gave to planning.”

During March, 1944, at Anzio, Italy, Cates was at the Regimental CP when shrapnel from a German shell hit outside the dugout area and Bob was wounded in one of his eyes.

It was necessary that he be removed from the field of battle.  Later, Bob would be promoted to the rank of Major and would be decorated with the Legion of Merit . . . .”

But that is not the end of the story.  Uncle Bob recovered from his wounds, although he wore a glass eye and carried shrapnel in his back for the rest of his life.  Back home, he returned to the family business and ran it until he retired in the 1980’s.  He was elected Mayor of the town and served several terms and was considered a civic leader.  Bob and his wife Helen raised three boys who served honorably in the US military.  His oldest son Robert, my cousin, recently retired as an officer in the USAF, provided the pictures which illustrate this remembrance.  Uncle Bob passed away a couple of years ago, as many veterans of the great war have.

So what leadership lessons can be learned here?

Plenty.  Consider pondering that an exercise for the reader.

Most of all, folks like Uncle Bob set a high bar for us to follow.   If they could fight world dictatorship, recover from disabling wounds, raise a fine family, run a successful business, and become leaders in their community – what excuse do we have to do any less?

When you see a veteran today – or any day – thank him or her not just for their service to our country – but thank them for the example that they are to all the rest of us.

Wayne Hale is retired from NASA after 32 years. In his career he was the Space Shuttle Program Manager or Deputy for 5 years, a Space Shuttle Flight Director for 40 missions, and is currently a consultant and full time grandpa. He is available for speaking engagements through Special Aerospace Services.
View all posts by waynehale →
This entry was posted in Uncategorized and tagged example, leadership, veterans. Bookmark the permalink.