A Few Word About This Picture 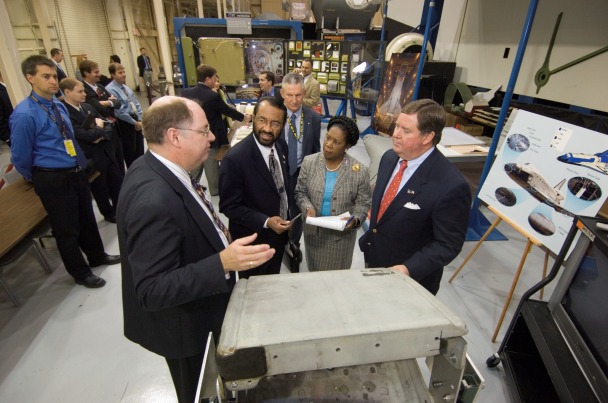 I ran across this picture from the NASA public affairs archives yesterday and the more I think about it, the more it illustrates some principles that are in effect even today.

First of all it is a picture of me getting to brief Texas Congresswoman Sheila Jackson-Lee and her staffers.  Just another picture that JSC public affairs took of Wayne briefing yet another dignitary, lots of those to go around.  Mid 2005 and we were trying furiously to get the shuttle back into flight.  Periodically – frequently – we were visited by various elected officials or their staff who would check on our progress.  After all we were burning through a great deal of taxpayer money and they had the responsibility to see that we were not wasting it.

The particular topic under discussion at this photo stop was detection and repair of damaged thermal protection tiles during flight.  That is a pretty arcane technical subject, and Congresswoman Jackson-Lee and her staffers were trying their best to stay focused.  In the background you can see my boss, JSC Center Director Jeff “Beak” Howell – a former Marine Corps Lieutenant General.  He is very interested in how well I can convince our visitors that we are making satisfactory progress.  His expression does not lead me to believe that I was doing a good job when the shutter snapped on this picture.  In the background you see many NASA civil servants and contractors who were distracted from their normal duties for the day in order to put on a well organized and effective presentation.  They are all quietly pulling for me to get the explanation over with so they can go back to their “real” jobs.

Of course, Congresswoman Jackson-Lee’s district does not include JSC, nor is she on any space-related legislative committees.  Her constituents are not terribly interested in space, her district in largely urban downtown Houston was and is primarily interested in jobs, civil rights, and related matters.  But the congresswoman is a member of the Texas congressional delegation and is well respected in the House of Representatives, so it was important for her to understand what we were doing. It was important for us to make sure she heard it right.

I realized that Congresswoman Jackson-Lee was not getting the whole story.  I changed track from the technical discussion of chemical interactions required to form a good bond between the silica tiles and the organic repair material in the vacuum of space.  Instead, I decided to talk about the work that NASA people do in the schools in the area –  including in her district – encouraging children to stay in school and study, especially to study the hard subjects of math and science.  Fortunately I had recently been given a good briefing on the subject and could quote statistics and give a couple of illustrative anecdotes.  Then we started talking about employment provided by the space program to small disadvantaged businesses in the Houston area – in her district.  Good jobs with good benefits, both professional and blue collar jobs were provided through contracts with SDBs.  Now I really had her attention, and her aides were taking furious notes.  Then our time was over, the entourage moved on to the next show-and-tell stop.  Beck told me later that I had “done good”.

So what can we glean?

First: all politics are local, congress faces election every two years and the constituents want to know what their representative has done for them lately.  If the constituency is interested in jobs, all government work had better look like a jobs program.  Sorry if you don’t like it, but that is the fact of political life in America, then, now, and in the future.

Second:  not everybody is awed by the glamour and romance of spaceflight, not everybody is a tech geek; but we are asking all taxpayers to make a compulsory contribution to the space program.  If one wishes to use the taxpayer’s money one had better be ready to justify it in very concrete, non-romantic terms.  Sorry if you don’t like it, but that is the fact of political life in America, then, now, and in the future.

Third:  government bureaucracies are inherently inefficient.  After all, they have to cater to all kinds of political directives.  Just look at all those folks standing by to give their part of the show.  But without doing that, support won’t be there when the budget votes come up.  And those SDB contracts were in place because the Federal Acquisition Regulations require a certain percentage of taxpayer dollars go those type of businesses.  Does the FAR lead to inefficiency?  Maybe, maybe not.  Do you hate the FAR?  Get over it; the FAR is not going away; it is the price of doing real business with the government.  Sorry if you don’t like it, but that is the fact of political life in America, then, now, and in the future.

If you want to get things done in this democracy, you have to build a political coalition that agrees with you.  Standing on your soap box in the park railing against those who disagree with you may satisfy your ego but it will not get your program enacted.  Reaching out to other folks who have different perspectives and interests than yours is exactly what the political system is all about.

And one more note: one of the highlights of my college years was a personal meeting with the predecessor of the congresswoman:  Barbara Jordan.  You might think that a while middle class techno-geek college student would not have found much in common with her.  Just the opposite; true leadership and heroism outshines merely local and temporal politics.  Barbara Jordan will always remain one of my heroes.  There is a point in that story, too.

12 Responses to A Few Word About This Picture