JFM to the rescue

I started working in NASA’s mission control back in the days that dinosaurs roamed the earth and all computers were mainframes.  There was a quintet of IBM 370/65’s on the first floor of the MCC and we flight controllers weren’t allowed to touch them.  They drove small black and white data display screens which could only be changed by the high priesthood of computer programmers.  If we wanted to change a display, we had to carefully hand code sheets with the mathematical descriptions of what parameters we wanted to see and where.  These sheets were converted to punch cards (!?!) and entered into the machine by special personnel.  Mere mortals were not allowed in the processing.  In a couple of months, a software drop would include your display change, and a special time would be set up to check out the new displays.  Invariably there were errors and correction requirement sheets would be submitted, and then in another couple of months you might get the update.

It all seems so archaic now.  But that was the heritage of the Apollo era MCC when I started to work in the late 1970’s.

During STS-1, as we hand transcribed data from those little black and white screens to use in our new HP hand calculators, I kept thinking how neat it would be if we could plug in one of those new Apple IIe computers into the data stream and get automated answers rather than those hand calculations we used.  At least we had moved past the slide rule era

In those early days of shuttle, a number of the younger, new flight controllers got together to organize a try to get “offline” minicomputers into the MCC.  Every time we tried an official request we were turned down – no money, besides, the MCC was good enough to get us to the moon, why does anyone need more?  So we plotted an unofficial flanking movement to the High Priesthood of computer programmers.

And some time in those days I met a new, young flight controller, just out of the Air Force, working in the communications systems section:  John Muratore.

John was an energetic, clever, and articulate leader in our little group of malcontents.  As an electrical engineer, he was up on the latest and greatest minicomputer technology.  We found a common cause together and I developed a great deal of professional respect for John.

As it happens, he is one of the few Yale engineering graduates in the NASA world.  His patrician New England family didn’t really understand why he would study engineering over law or finance.  But it was a good thing that he did.

As it happens, the Flight Control management decided that I, a mechanical engineer (specializing in rocket propulsion) would make a great manager for the Communications section, where everything is electronic.  They told me that a manager didn’t really need to understand the technical details of the work but just to organize the team.  Sounds like a bad Dilbert cartoon, right?  Right.  John became my mentor for all things digital.  Tough job, that.

But the good news, as the supervisor I had some leverage to help crack open the barriers in the MCC.  We bought a “minicomputer” – just for offline work (!) and looked longingly at the new (primitive) local area network that had been installed in the MCC to provide data to the payload customers.  John and I hatched a plan to go into the MCC late one evening, pull up the floor tiles, run cables, and tie into the network with our minicomputer. Looking back on it, I am surprised we weren’t fired.  But it worked, proved the process, and reinforced the message that innovation – if successful – would be accepted!

As time went on, I collaborated with John Muratore on many shuttle missions and projects.  John was the INCO during the ill fated launch of STS-51L, an event that changed all of our perspectives.

John was selected as a Flight Director in 1992 – he was “Kitty Hawk” Flight (colors having mostly been used up).  He worked four difficult missions culminating in STS-61 the first Hubble repair flight.  After distinguishing himself as a Flight Director, NASA management selected him to lead the team to build the new mission control center.  No more mainframes with minicomputers hung off a peripheral LAN; a truly distributed system.  John had the technical and leadership abilities to pull off that huge project.  We moved into the new control center and never missed a beat, never looked back.  And John did it by a combination of excellent team organization skills and by completely ignoring the old and cumbersome processes that had constrained the old mission control center organization.  He called the team the Pirate crew. It really was.

Next, the NASA management needed someone to develop a revolutionary lifeboat for the International Space Station.  John was their man.  He was put in charge of a small, skunk works team to build the X-38, the prototype for the Crew Rescue Vehicle.  It was a huge challenge.  A new pirate team was formed.  They had their bad days – like the very visible parachute test that failed.  But through it all, John learned the skills necessary for systems engineering.  Even after the X-38 was cancelled for political reasons, we knew that John would be back with an even more important assignment.

Somewhere during those X-38 days, John acquired a green flight jacket which he covered with patches.  We got to see a lot of that flight jacket over the next few years. 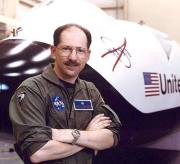 After the Columbia accident, the entire NASA shuttle management team was reassigned.  Bill Parsons, as the new Program Manager, asked for advice on the new team.  One of the most critical jobs would be the head of systems engineering and integration; and there was only one choice:  John Muratore.

It was John and his team, as much as anybody, that stitched together the plan and the tests and the analysis that allowed us to return the shuttle to flight.  Aerodynamics, solid mechanics, electronics, video, everything came under his scrutiny.  Those were intense days in 2004 and 2005.  But we made it successfully to flight largely through the efforts of the SE&I team – lead by John Muratore.

After John left NASA, he has dedicated himself to teaching a new generation of engineers the principles and practices which make good systems engineering.  I hope his students appreciate the critical role he played at NASA – always coming to the rescue of the agency at a critical time.

Now, I read that John has been asked by the SpaceX team to come to their rescue – to ensure that their systems engineering and especially the tricky software part is good enough for the challenges of space flight.  They couldn’t have asked for better help.  From all accounts John is truly respected in the SpaceX organization and has been hugely influential in their preparations for flight.

When the Falcon and Dragon fly Saturday morning – on their way to the historic first commercial cargo deliver to the International Space Station – no small part of their success will be due to John Muratore.

Wayne Hale is retired from NASA after 32 years. In his career he was the Space Shuttle Program Manager or Deputy for 5 years, a Space Shuttle Flight Director for 40 missions, and is currently a consultant and full time grandpa. He is available for speaking engagements through Special Aerospace Services.
View all posts by waynehale →
This entry was posted in Uncategorized and tagged John Muratore, SpaceX, X-38. Bookmark the permalink.

19 Responses to JFM to the rescue