Keeping Eileen on the Ground: Part II – or – How I Got Launch Fever

The STS-93 launch attempts proved the adage we knew well in the Flight Director office: When the weather is good, the vehicle will break; when the vehicle works perfectly the weather will be bad. On the first launch attempt – scrubbed due to hydrogen sensed in the aft compartment – the weather was good. The Space Flight Meteorology Group post mission report says all sites were GO – launch, RTLS, TAL, AOA, etc. All GO. Hard to believe that there were no issues anywhere. And of course, something broke.

Two days later, we had another great weather forecast, no issues. The SMG post mission report for this day says “Thunderstorms occur at KSC about 3.2% of the time for a 0400 to 0500 UTC launch window.” Guess Murphy doesn’t believe in statistics.

Deploying the Chandra X-ray telescope on its Inertial Upper Stage required a complicated launch window. The plan was to deploy the payload early in the flight. But you can’t just kick it out just anywhere. The IUS had a complicated navigation and guidance system and the telescope needed to get its solar arrays going pretty quickly – a long period of time in the earth’s shadow wouldn’t be good. And there probably were other constraints that I’m not remembering. Given the orbital constraints on the deployment window, a launch window could be calculated. But that is not the whole story; we should plan a backup deploy opportunity just in case we ran into trouble. And an alternate deploy window in case we wound up in a lower than expected orbit. And another backup deploy window in case we had to wait until the second day of the flight to deploy. Etc., Etc., Etc. Each of these deploy windows worked back into a constraint on the launch window. Covering for all the backups and contingencies meant that the launch window would be 47 minutes long.

As the countdown progressed, rain showers which built into thunderstorms popped up just off shore – not over the pad where they would be real trouble, but offshore to the east. And the prevailing winds were pushing the storms to the east, away from the launch pad.

After Apollo 12, we knew that thunderstorms meant lightening and lightening was bad for our space ship. No launching if the edge of a thunderstorm was within 20 miles of the launch pad. And one of the storms was right there. On the edge.

The Ops Manager, who chairs the MMT down in Florida in the firing room bubble, called me on the loop and asked about the constraints on the launch window. Could we extend it? Yes, by golly, we could, I decided. Bryan and I got on the loop with the IUS team out in Sunnyvale and with the Telescope POC. If we gave up the third backup deploy opportunity, that would add ten minutes to the launch window. Everybody agreed that it was unlikely that we would need that backup deploy opportunity. We all wanted to go. We were all frustrated that the launch had scrubbed earlier. This flight had been delayed several times in the planning cycle before we got to the pad; it was time for Chandra to fly!

The SMG forecaster put his electronic cursor on the satellite image of the edge of the storm, projected the storm movement based on wind speed, and opined that we would be good to go at the end of the window. So we waited.
Time passes very slowly.

Then the storm started building up, and expanded, and all of a sudden, and now that ten minutes would not be enough.

We were back on the loops again. Giving up another backup deploy opportunity would gain another 7 minutes or so. Were we all OK with that? Sure, let’s light this candle. GO.

I could tell that the Ascent Flight Director was not really comfortable with this broken field running. When John queried his FDO about the launch window close time, the FDO said he didn’t know when the window would close based on all the back room deals that the MOD was making.

That should have been a red flag. Instead, it made me mad. Hadn’t FDO been listening?

Just about that time, the thunderstorm on the edge of the launch area exploded. The trailing edge of the storm rapidly grew farther and farther to west. Against the wind. Over the launch pad. Time was up, no matter how you calculated it. We were done. 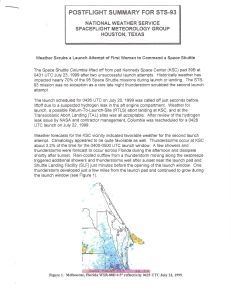 The crew rode the elevator back down. Launch was reset for 24 hours later.

We had an interesting debrief out by the coffee pot in the hall. That is the place all the really significant conversations in Mission Control happened. Not on the loop. In the hall at the coffee pot.

It became suddenly clear what a risk I had been running by negotiating real time changes to the launch window. We could have launched into a miscalculated window that left us no options but to return with the telescope in the payload bay. Of if we needed one of those backup deploy windows we would have been out of luck. What had I been thinking?

So when folks point to the damage that has been done on other launches when officials got launch fever and let go of good judgment, I think about the second scrub for STS-93. And how sometimes an errant thunderstorm can save you.

Next time: what happened when we actually launched.

17 Responses to Keeping Eileen on the Ground: Part II – or – How I Got Launch Fever