Thanks to Iron Flight for reminding me of this obscure situation.  And for Holly who wants to understand.

This mostly true story is about the Space Shuttle payload bay doors and what to do if they won’t shut properly.  And how we forgot about that emergency in our rush to achieve other mission objectives.

Some months ago, I visited Atlantis at the Kennedy Space Center visitor center.  Superbly displayed, it is the only shuttle vehicle with the payload bay doors open.  In the picture you can see some of the rube-goldberg mechanism that operates the doors critical latches to ensure the doors don’t spring open during aerodynamic flight.  A set of push rods and hinges at the sill open and close the doors.  A long set of push rod/bell crank mechanisms located in the front and rear edges of the doors operate the latch mechanisms.  On the bulkhead just aft of the crew cabin you can see the black cylindrical knobs which the latch mechanisms grab onto to secure the door in place.  More latches and their mechanisms ran down the centerline of the doors.  If this sounds complicated, it is. 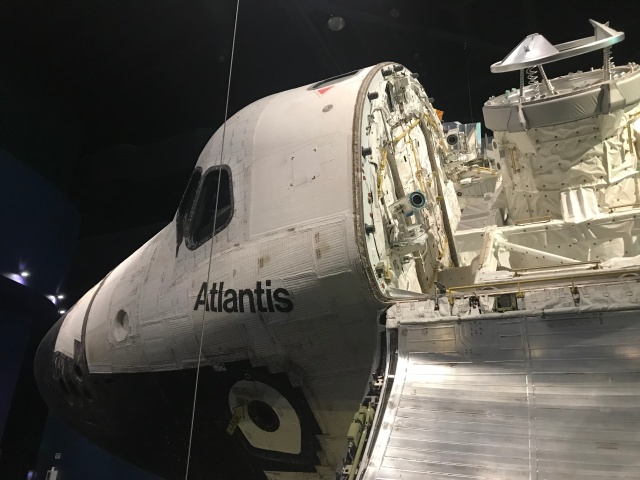 Early in the shuttle days there was a huge concern about what to do if the doors did not close and latch properly at the end of the mission.  The doors had to be open during most of the orbit stay time for cooling and to allow satellite deployments or other objectives.  But during re-entry and the atmospheric part of the flight, the doors had to be firmly shut and latched down.  If they were to spring open and rip off, the vehicle would become uncontrollable and catastrophe would ensue.  Flight rules prohibited deorbit with any more than one set of latches not closed; and in that case the aerodynamic maneuvers were to be severely restricted.

Of course, the power to the motors that drove all this mechanism were redundant but that did nothing for a physical jam.  During STS-3 a thermal engineering test caused the doors to become banana shaped and prevented – for a short time – closing the doors.  This was done on purpose to see what the limits of the spacecraft were.  We found out.  And never did it again.

Long before STS-1 flew, a set of procedures for a spacewalking crewmember to deal with potential problems was developed and practiced.  I got my opportunity to take the class; use the tube cutters to cut a pushrod that had jammed, put clamps around unclosed latches to hold doors tight, and more.  There was a whole set of tools flown on every shuttle flight to deal with this contingency and every crew got at least one practice session on how to deal with it.

But the trick is that a space suited crewmember must get to the doors from the inside.  Normally this is not a problem; with an empty or near empty payload bay the EV crewmember just translates to the worksite; latches everything down, returns to the airlock door and ingresses.  Oh, and quickly gets out of the EVA suit and into the Launch/Reentry Suit and straps down because deorbit must occur shortly after the doors are closed and the radiators can no longer cool the ship.

If a payload blocked the path from the EVA worksite to the airlock, early in the program they were always jettisonable.  Not a problem.

Despite the complicated design, the payload bay door and latch mechanisms worked perfectly on every mission.  Over time, the concerns about having to deal with a failure faded away, even though the procedure and tools were on every flight.

During the evolution of the shuttle design, the European Space Agency built a laboratory to fit in the shuttle payload bay.  You can see the SpaceLab module on display right behind Discovery at the Smithsonian Udvar-Hazy center in Virginia.  Before the ISS, this was a facility to do micro-gravity research for up to three weeks in space. 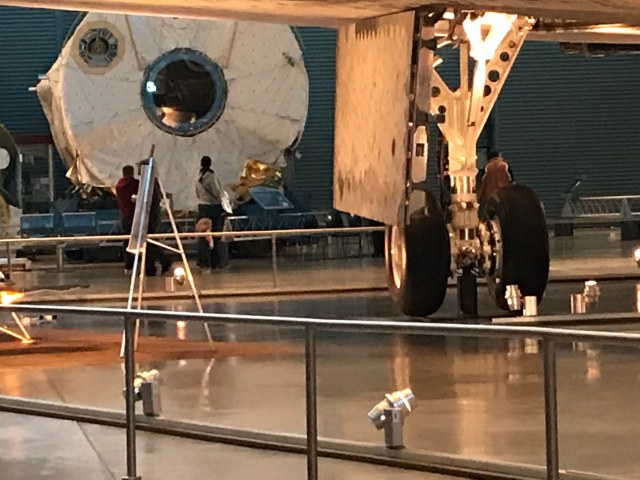 But there is a trick that the designers missed.

If the mechanism on one of the aft payload bay door latches failed, and an EVA crewmember had to go back there to secure the doors down, there was no way for that crew member to squeeze past the SpaceLab module to get to the airlock with the payload bay doors closed.  Jettisoning the SpaceLab was not a task that an EVA crewmember could do.  The way home was going to be blocked.

It may have been the first SpaceLab mission when we discovered this, but my recollection is that it was uncovered later, during a simulated mission.  Those darn Sim Sups!  They always made us work problems that were unrealistic!  Except that most of the time they weren’t.

What to do?  No more SpaceLab flights?  Unacceptable.

Review the risk?  Great history of reliability, low likelihood of needing to do the EVA.  Case closed?  Not exactly.

Here is the crazy resolution.  If the aft latches had to be secured on a SpaceLab flight, then the crewmember would just stay back there.

There was a good place to strap down at the bottom of the payload bay aft of the SpaceLab module.  It would be a short wait from finishing up with the doors until the deorbit burn, probably no more than an hour and a half.  From deorbit burn to the ground was about an hour and in normal flight the g loading was light, nothing more than 1.5g.  The EMU had plenty of consumables to work for the necessary time, but there are a couple of sticky things to resolve:

So that is the story.  Accept the risk because we think it is low; have a screwy contingency procedure ready if we’re wrong.

But that is not the way you really want to fly in space.